As part of his three-day visit to China, the Duke of Cambridge opened the GREAT Festival of Creativity in Shanghai. Running until March 4 2015, it promotes British innovation in China and celebrates the bond between the two countries.

The Duke of Cambridge’s commitment to creativity and UK business in China bodes well for Isle of Man-based Dr John C Taylor OBE FREng, one of Britain’s most prolific living inventors and a man to whom China is especially important. 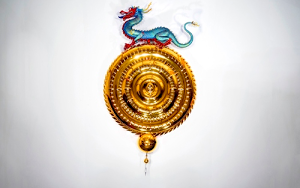 During a successful career in which he invented, amongst other things, the cordless kettle, Dr Taylor worked with the Chinese from the 1960s onwards and opened a factory in Guangzhou in the 1980s.

Though he is not at the GREAT Festival of Creativity, Dr Taylor will be exhibiting his iconic Dragon Chronophage clock at Design Shanghai on March 27-30 2015.

Design Shanghai is China’s premier design event and will attract the very best designers from China and around the world.

Speaking about the royal visit, Dr Taylor said, “My career brought me to China many times and I always enjoyed my visits.

“I have a great deal of respect for the inventiveness of the Chinese and their love of great design. It is a trait that has been central to their nation’s character since ancient times.
.
.
.
.
“Business is unlike anywhere else because the Chinese are so interested in product innovation and inventions. I was dealing with entrepreneurs who wanted to know what the product would do, rather than the price. This was the refreshing difference across the board in China. People were consistently open-minded and wanted new ideas.

“I’m glad to see that the Duke of Cambridge is celebrating the creative link between Britain and China – a link that will benefit both nations in years to come.”

Dr Taylor’s Dragon Chronophage is one of the world’s most unusual clocks. Valued at over £3 million, or 29 million yuan, it is also one of the most valuable. 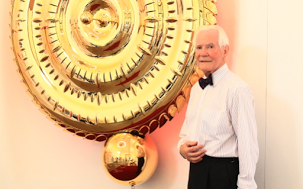 It was designed in tandem with one of China’s leading authorities on art: Professor Long of China Academy of Art, Hangzhou.

It is designed to make reference to Einstein’s theory of ‘relative time’ and speeds up, slows down and even stops, reflecting the fact that our perception of time can change depending on our activity. The clock is correct every fifth minute.

A feature unique to the Dragon Chronophage is the appearance of a single pearl at the top of every hour which is then swallowed by the dragon.

The Dragon Chronophage’s elder sibling, the famous Corpus Chronophage, is displayed on the exterior of Corpus Christi College, Cambridge, and has become the university city’s most popular tourist attraction.

The Dragon Chronophage will be on sale at Design Shanghai and Dr Taylor hopes that it can perform a similar function to that of the Corpus Chronophage, but in China.

China has always been special to Dr Taylor, who first visited Hong Kong on business in the 1960s and set up a factory in Guangzhou in Guangdong Province in the 1980s. As one of the world’s leading inventors, he appreciated the enthusiasm for design that it seems is part of the Chinese DNA.

Dr Taylor has also conducted a lot of research in the subject of horology. His admiration of John Harrison, an early pioneer of clocks and time-keeping, led him to design and help build the Corpus Chronophage, a three metre-high clock that lives on the exterior of the Corpus Christi College building at Cambridge University.

Dr Taylor has been the recipient of many honours including, but not limited to, the following:

- Appointed as a Fellow of the Royal Academy of Engineering for his outstanding contribution to the advancement of British engineering, innovation and commerce

- Being conferred an Honorary Doctorate from UMIST